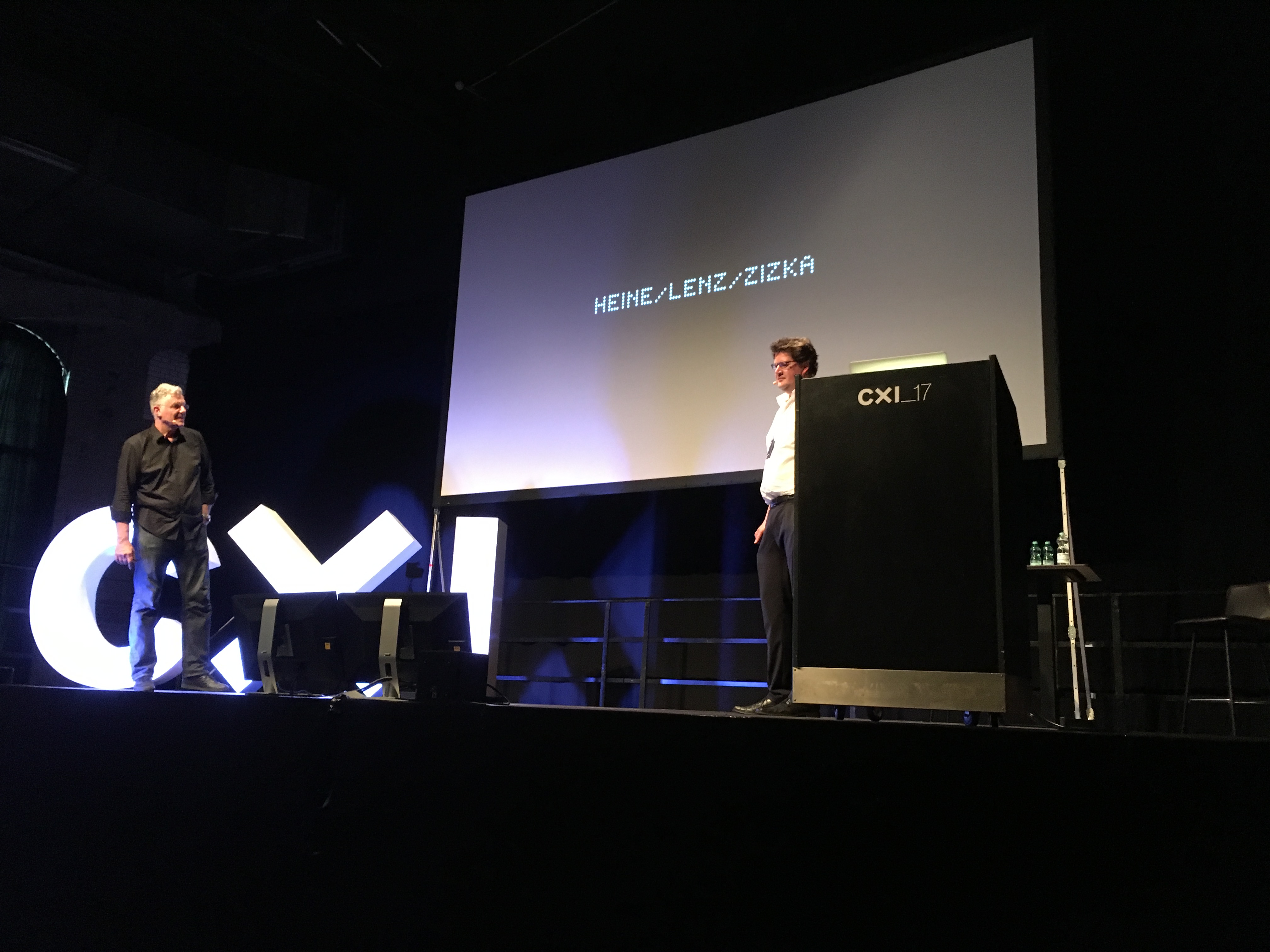 Heine/Lenz/Zizka at CXI, a veritable classic. This year together with a long-term client, the Hamburger Kunsthalle. In 2014, the dilapidated state of its premises forced the museum to close two of its three buildings for lengthy remodeling. Their plan was to keep the remaining building open and operating; quite a challenge, as the construction site vis-à-vis the central station seemed too dominant, discouraging any possible visitors.

The museum’s request was to let everybody know that the Kunsthalle would remain open during the construction period, and to guide visitors to an interim entrance. “Grab their attention”, this was the core of the briefing, and it was also the inch Achim Heine grabbed and turned it into an ell, transforming a small request into a major project: a 360°-campaign including interim corporate design.

“This agency never sticks to briefings,” a smiling Jan Metzler, Head of Communication and Marketing, explained.

Several additional flaws of the Kunsthalle’s presentation were identified during a workshop, as the team took a close look at the institution’s history and current situation. The museum was founded in 1869 by Hamburg citizens, and is one of Germany’s most popular art museums. Its depot includes one the most important art collections; both of which facts were not communicated at all.

Centerline-oriented design, a handicap to any creative layout, no brand name impact, inconsistency: “The Kunsthalle was selling itself short,” said Achim Heine. So they told their prospective client. “Uncool clients simply show you the door. (…) But there’d be no use in working with them anyway.”

An interim solution was necessary. The construction-site-theme was exaggerated to the max, even turning the Hamburger Kunsthalle (art hall) into Hamburger Kunstbaustelle (art construction site). A large round yellow sticker with dotted lettering was stuck on all already-placed information signs, so that they could still be used. And on the outside, giant versions of the flashy yellow circle were pasted on the building site fence, guiding visitors to the makeshift entrance. This design element was consistently used in all media. The current state of construction was communicated via microsite. The motto “Weiter Offen” (still open) was followed up and developed upon: “Weiter staunen” (keep on being amazed)”, “Weiter träumen” (keep on dreaming), all the way to “Weiter feiern” (keep on celebrating) on a Christmas card. The exhibition titled “Spot on” was created while construction was still going on and used the interim corporate design with sticker-segment; using a spotlight theme to highlight specials masterworks. The dotted lettering was turned into a font, making it much easier to apply.

“The feeling is actually that the Kunsthalle is more open when it’s closed”, as Jan Metzler quoted a staff member as saying. The site fence was also used for placing political statements, i.e. against a Nazi-demonstration, or for free welcome-tickets to be passed out to refugees arriving in Hamburg; Hamburg residents were more than happy to use this opportunity for statements of their own. An initially unknown artist reclaimed the construction sign for art, by painting the letter H in front of “Offen” (open), turning it into “Hoffen” (hope). Elisabeth Richnow later outed herself as the originator.

Social media was another important point on the agenda. Once a week the agency sent a staff member from Berlin to Hamburg to communicate whatever there was on social media channels. Getting into the top ten Facebook pages of cultural institutions was quite a feat! A construction-site-blog did not really work, obviously there is also such a thing as information overkill. One of the many things the museum learned on the way.

In hindsight, the color yellow was difficult, not only because of its association with a German political party. “Our background is really deep Hanseatic blue,” Jan Metzler emphasizes. Another no-go: Hamburg’s Alster-ordinance prohibits all advertising along the banks of the river Alster. The agency deftly overcame negotiated all obstacles: the museum’s management agreed to give the usual color a try, and the municipal administration accepted a widely visible “Still open” as art installation, rather than advertising.

Putting art back on the pedestal

Remodeling was completed in April 2016. The day of the museum’s reopening was planned as a festive moulting process. Heine/Lenz/Ziska’s motto for the opening was “Art is back!”

And there were even more changes: the slightly staid design with central axis was abandoned; a new word mark and a layout-system making it much easier to integrate images and color fields provided new pizazz to the Kunsthalle’s appearance. The very charismatic word mark – bold, versal in ITC Johnson – sits on top of the (image) field. Headlines follow the same principle, they bleed and touch edges, even exceeding the format. Lots of white space allows images to star, and leaves lots of room for perfectly positioned information. The color concept is not limited to Pantone-numbers, making it possible to select just the right shade for any exhibition. Heine/Lenz/Zizka designed a new visual identity, all the way to the signage system, that is identifiable even when it is used as modules.

“We‘ve got a great new logo, and we should use it for our re-opening campaign!” – Jan Metzler. The agency convinced him to drop the idea.

The re-opening-campaign communicated “Art is back!” and placed 24/1-size posters at various places in Hamburg, each directly connected to their location. The logo was not used on these posters. The only information provided was the date of the re-opening. The façade of the Kunsthalle was adorned by a large white banner featuring the same slogan, but no image. This unusual restraint turned the posters into the talk of the town, and on re-opening day waiting lines went all around the modernized buildings, with 205,000 visitors during the first month after re-opening breaking all records. And once again, a Kunsthalle-campaign coined a local idiom: a tagger sprayed the motto on a locomotive. Jan Metzler’s comment: “That’s damage to property, that’s not permissible.” 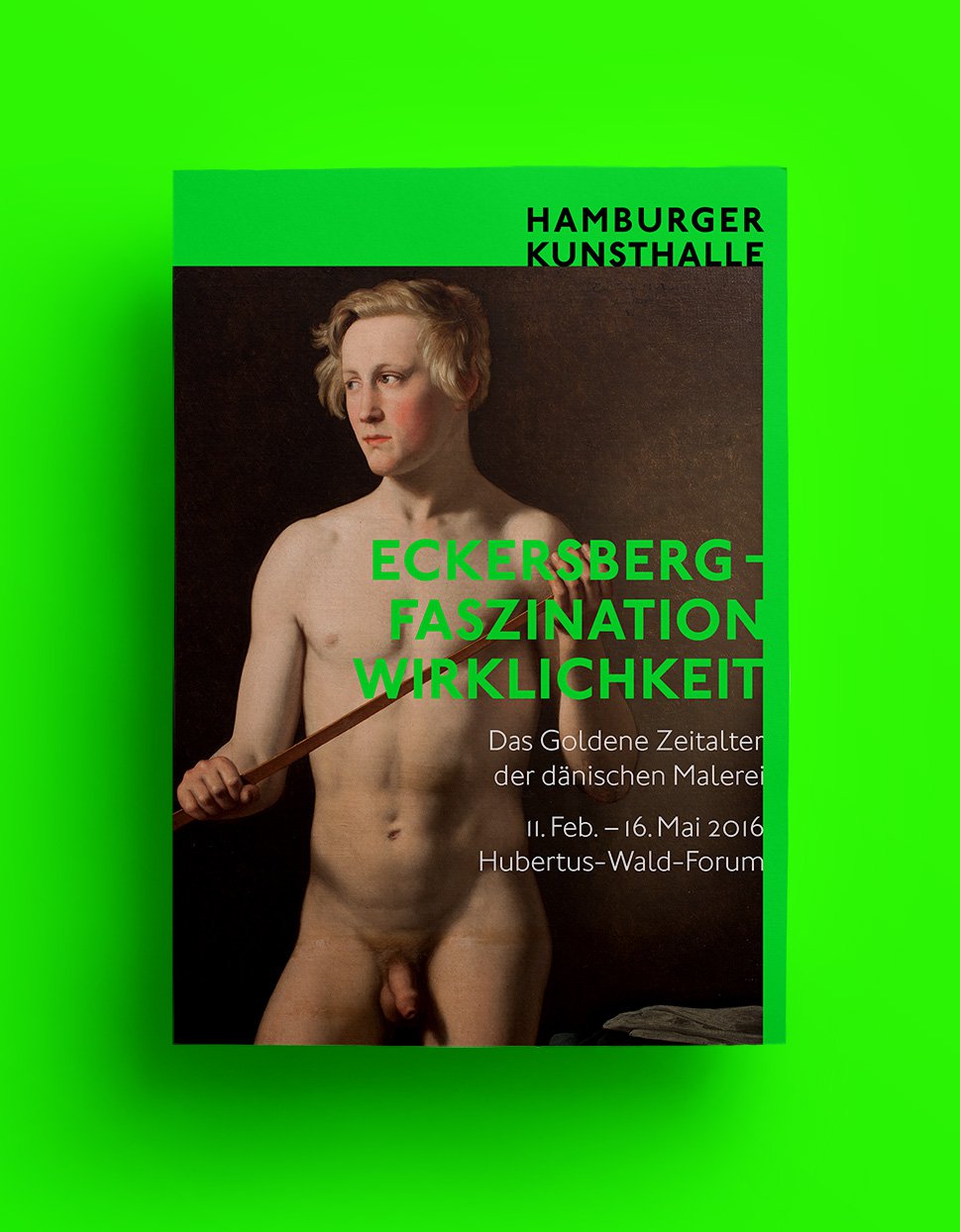 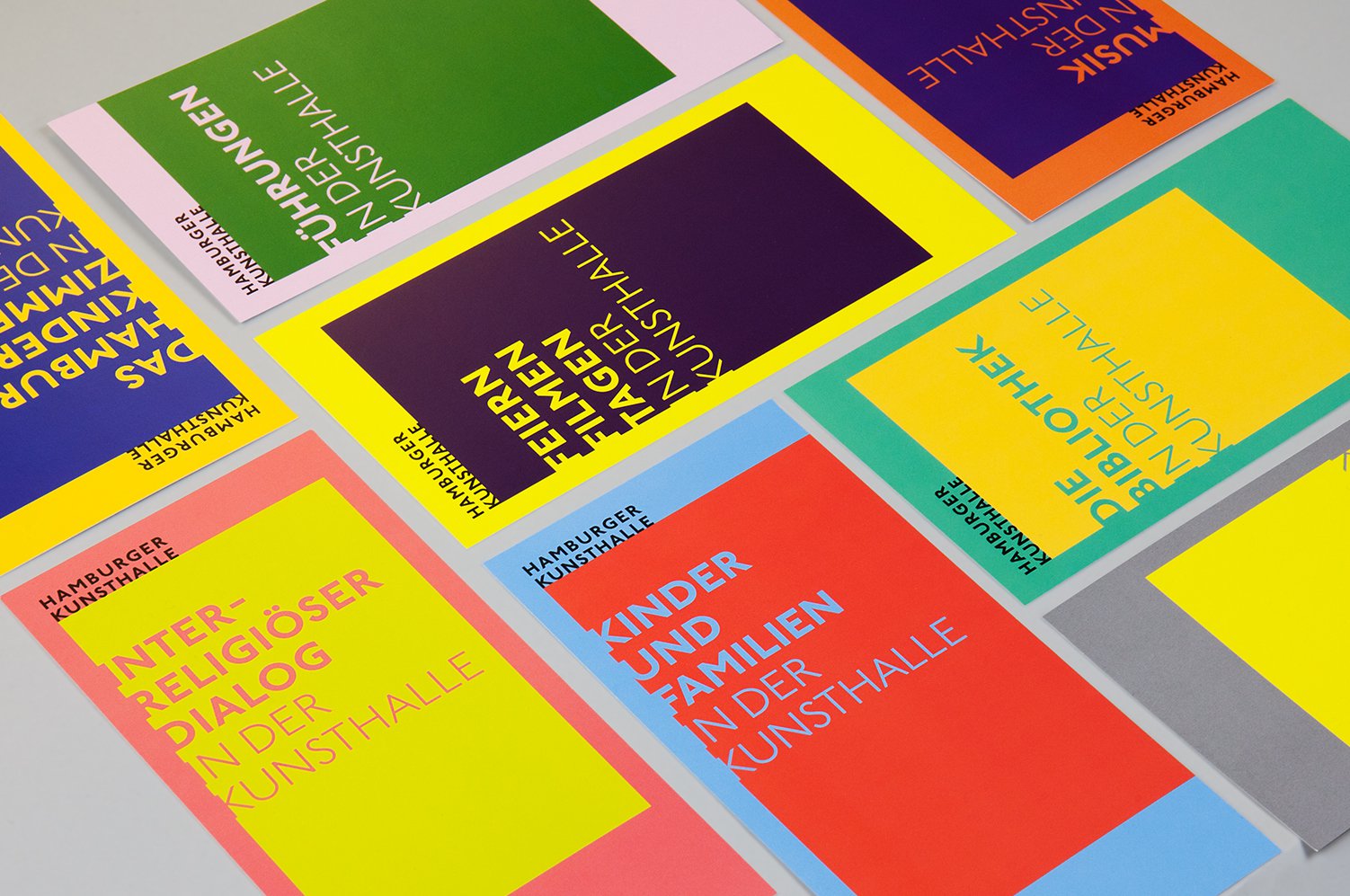 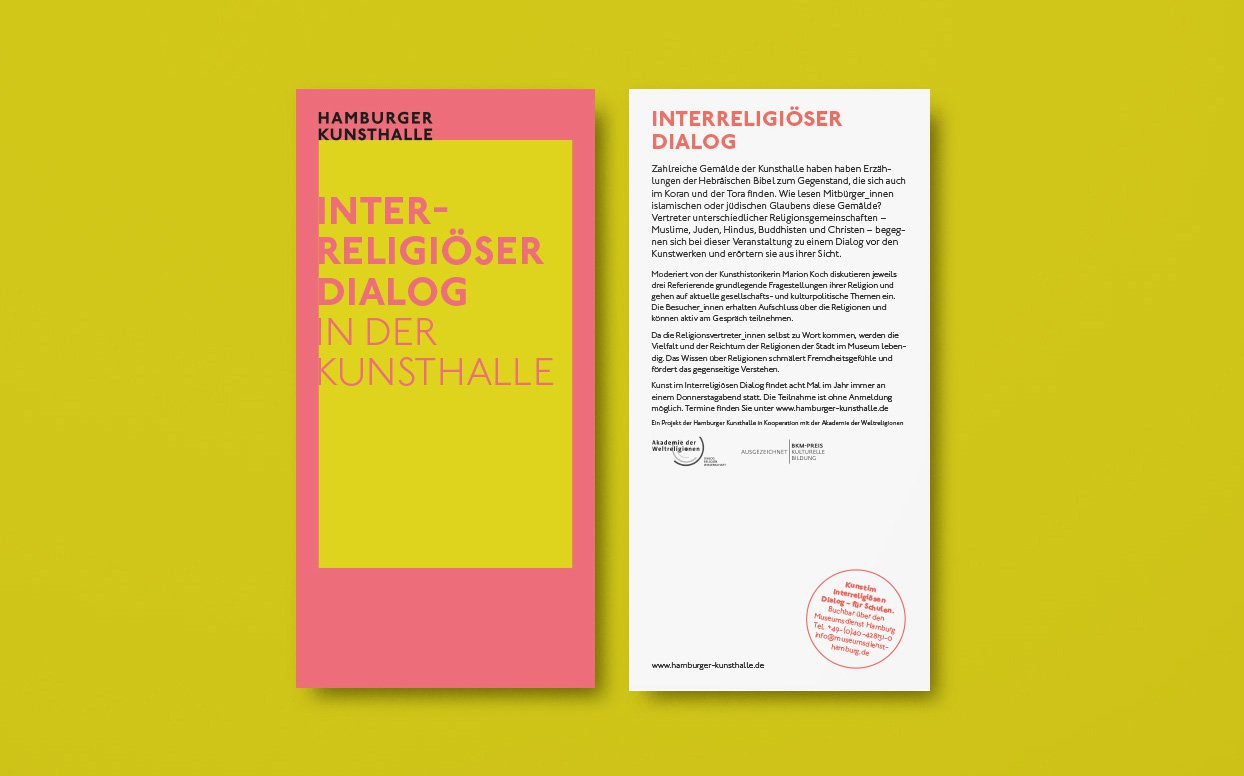 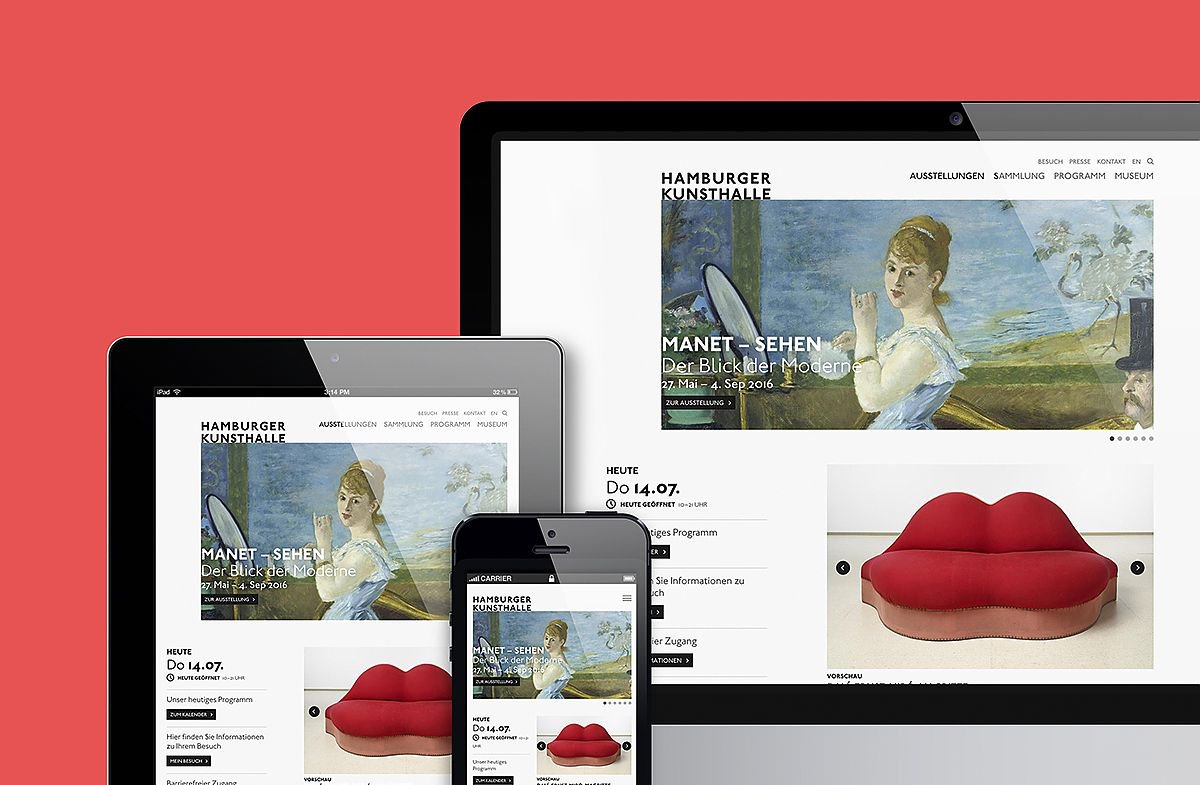 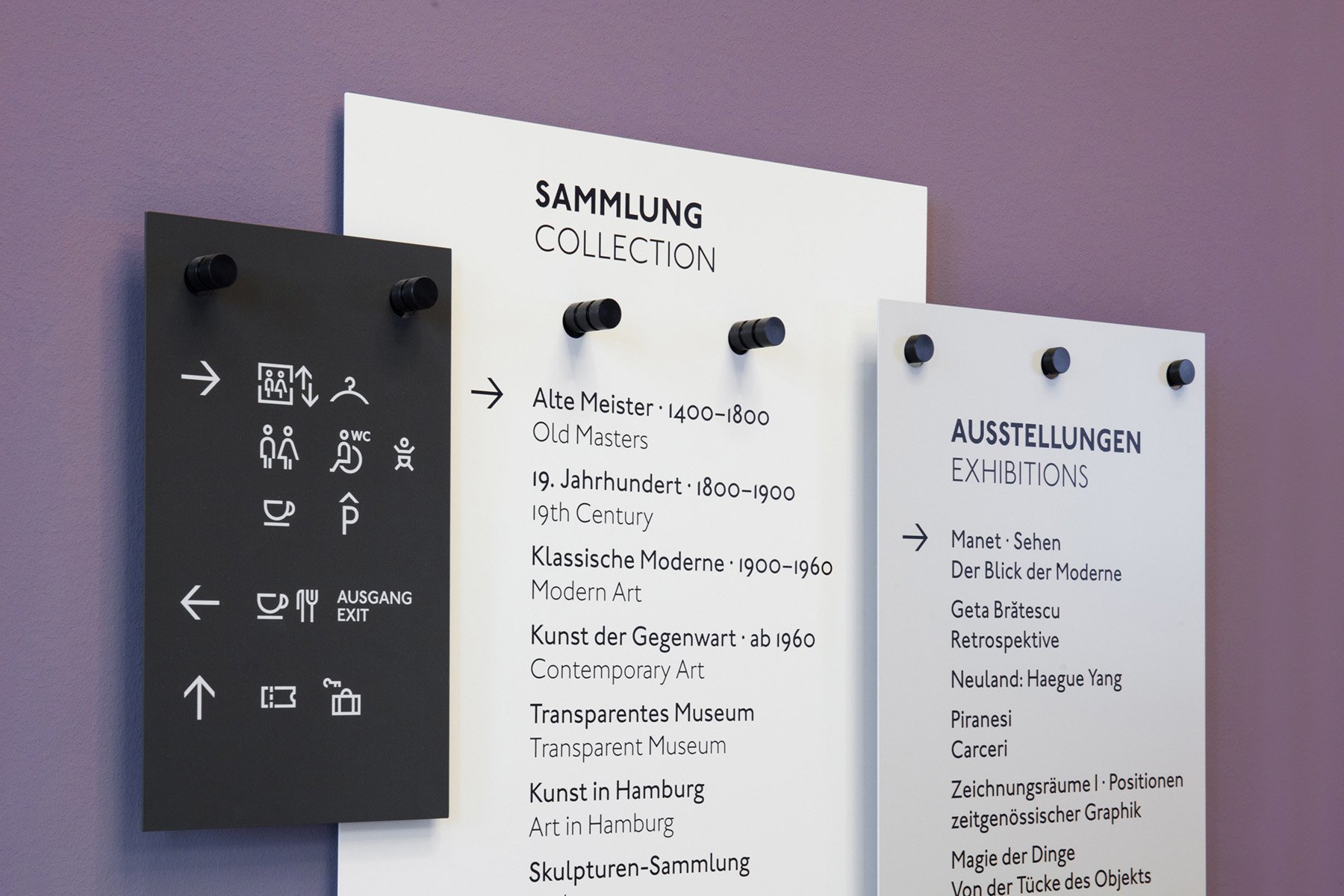